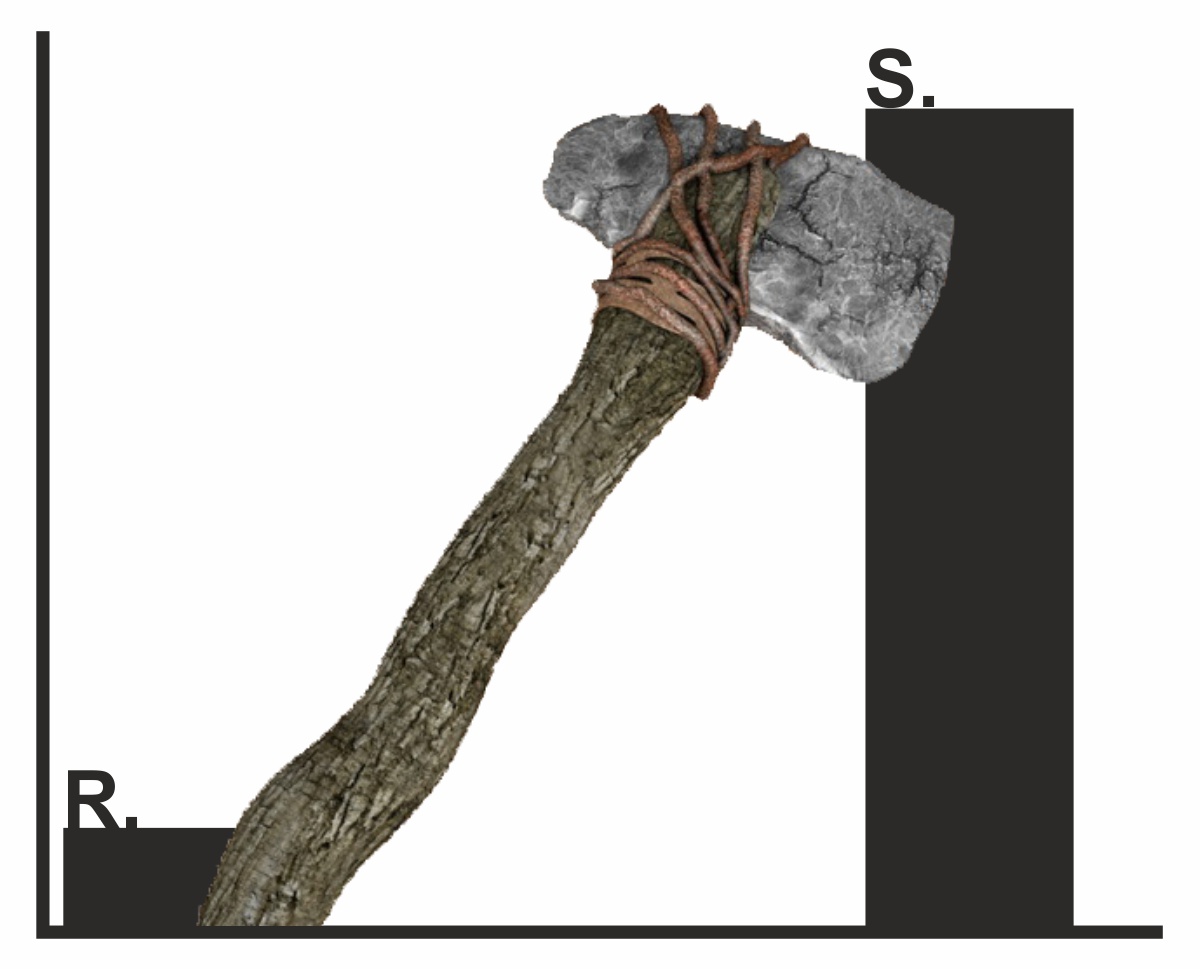 Uplift & The Dangerous Illusion Of The Poverty Gap

How the enormous gap between the rich and poor may be being misinterpreted. And how to lift the world to a new age of healthy prosperity for all.

A Long Time Ago…

Imagine a couple of cavemen. Let’s call them Rok and Stik. They’re identical in all their particulars. Both have the same size cave, both have a mate, both have nice big sticks to go hunting.

Each day Rok and Stik go hunting, sometimes together, sometimes in different directions. Each takes their stick to hit things with and bring home the bacon and other goodies.

They live a simple idealistic, fantasy lifestyle of fair equality. They share in the world’s bounty and live the same level of income and well-being, although they do only have a lifespan of about twenty-eight years, but that’s another story.

One day Rok and Stik go hunting, but this time something different happens. While Stik is out foraging for some of those boar in the woods he trips over a big sharp rock, maybe it fell of that mountain, you know, the one behind him, with the smoke streaming out the top. He cuts himself and skips and hops around, cursing the day he came here. But then, in a flash of inspiration he has an “idea”!

Yes, the first big idea of the post-dinosaur age.

That was a sharp rock, Stik thinks, maybe if I took some of that long grass or a few vines and tied the rock to the end of my stick I could do some real damage to something. He grins at the thought of bringing more meat back to his cave.

Soon Stik is enjoying his new idea. A few chops with his new StickRock(TM) brings down the hardiest boar and he’s progressed to larger food sources, his cave is thriving, a couple of new mates have joined him (it’s a cavegirl thing) and he’s thriving.

Meanwhile, in the cave across the valley, Rok is still bashing things on the head with his stick. He’s still feeding his family, but nowhere near as well as Stik.

Soon a disgruntled Rok is glaring in hate at his neighbour: the every-thriving Stik and his growing tribe.

The same issues arises. Today we call this the poverty gap, but perhaps we’re being led to misunderstand the true nature of that gap – it’s not as simple as we’re led to believe by those, politicians, press and protesters, who want to take our power away for their glorious campaigns.

The idea in a “poverty gap” we’ve been led to believe, is that some people, like Stik, are getting richer and richer, and that somehow, in some way they are taking wealth/resources from others, like poor old Rok.

However, this could be interpreted in another way – that some people are bringing more wealth/resources into society.

There is certainly a gap, a huge gap if you take the most extreme cases of, say a poor person from a ghetto beside the unbelievable wealth of a dotcom wunderkiddie; but is that a case of the rich stealing from the poor or just the rich creating wealth?

The poverty gap cannot be seen, must not be seen, as just a major difference in resources/wealth from one person, or small group, to another. There is a substantial difference in wealth-creation processes going on.

Those becoming enormously wealthy are in many cases the creators of new wealth: innovators, designers, technology exploiters with their new creations that bring more wealth into society.

This is treated with disgust by many who cannot see that they’ve created new wealth. Still there is the belief that somehow, in some way they are stealing from the poor and perverting the state of a “fair” and “balanced” society.

I believe the fundamental issue lies not with the gap but with an understanding of the nature of wealth creation through new innovation.

If we want to solve the poverty gap we must understand first the relative nature of that poverty.

In my example, The Tale Of Rok And Stik, Stik becomes wealthy and creates a gap with Rok. But Rok hasn’t suffered a loss or drop into poverty. His life is the same as before he has the same resources, the same income, the same lifestyle, it’s just that in comparison with Stik his wealth appears to have dropped, if you assume that everyone is and has to be equal.

Equality doesn’t exist. Everyone, and everyone’s circumstances are different. Our wealth in society today is so great that all but the very poorest live healthier lives than those a hundred or more years ago. It’s just that the sheer scale of wealth flowing through society appears unfair, to the Rok’s of the world.

Yes, I know it’s not that simple and a thousand counter-arguments can be made, but each can be addressed.

For example, there are those who are wealthy but never created or benefited from its creation – the predators, bankers come to mind nowadays, the thieves, the deceivers and the corrupt. Not satisfied with a “fair” lifestyle and not able to create their own source of wealth, either through lack of talent or poor circumstances far beyond their control, they seek the wealth of the wealthiest, but have to prey on the weak. The beasts of the fields devouring resources from the toil of others.

Society has evolved for thousands of years to try and create balances that protect many people from being exploited in this way. Sometimes these methods work, sometimes they fail, are overthrown and replaced with better ones, until the next cycle, we call these revolutions, rebellions, civil wars, or wars of conquest, for resources, for power, for mates.

Poverty and unfairness does exist in failing systems. Today (February, 2014) in Britain the social-economic-political system is breaking down and unfairness is rising and running rampant throughout the country as hundreds of thousands are being crushed down.

This is not just a system failure, this is a deliberate policy to ruin the enemies of whoever is in power today and creating severe instabilities and inequalities that can be traced back for decades.

There are solutions. Democracy and democratic government can address some of these issues in some ways at the political-economic level but we still need a new alternative to the creation of wealth and opportunity. The political system is unlikely to deliver such a solution.

Unlike those ancient days of leisure and plenty, when a human can just stroll outside the cave and club some breakfast that’s walking past, we now live in immensely complicated societies that demand far more sophisticated systems of resources allocation and delivery for us to survive and thrive. Equally we need to find ways to ensure that those resources reach everyone if we are not to degenerate into tribal and anarchic warfare.

The recent woes of the world economy have shown an issue with resource allocation – often businesses needing money (resources) to survive have been denied access to anything by a banking sector that is restrained by its own internal and archaic traditional systems. Similarly innovators, the true creators of wealth, suffer endless trials and tribulations gaining even the smallest access to resources for their own innovative wealth-creation.

There is now less opportunity for a new Stik to just turn over a stone and make a new life for himself, there are far more obstacles intent on holding him/her back. This is where new attention is needed, to loosening the system of wealth allocation such that the real innovators can close that gap, creating new ideas, innovations work, prosperity that will spread through society.

I call this “Uplift”.

Uplift is all about answering the two issues of closing the gap and doing so in a fashion that is fair to everyone.

For many social activists the easiest solution to closing the gap is to drag the richest down to the level or closer to the level of the poorest. That’s no stimulus to new wealth creation, it doesn’t encourage anyone to new work if they face political or religious hatred and assault on their efforts.

Uplift is about the mechanisms, economic, educational, political, philosophical, that encourage more active participation in the economy by stimulating and encouraging a healthier, informed and financially capable community of workers, creators, innovators, more.

Uplift is about lifting world civilization to a new prosperity, a new enlightenment, a new health and sanity free of ignorant savage hate and discouragement to their talents.

Uplift is opposed to wealth taxes, to political arguments about “hate the rich”.

Uplift is about understanding and reshaping the mechanisms in our current civilization to solve these issues without hatred in a just, fair and equitable way for everyone’s benefit.

And a new evolution of prosperity for all.