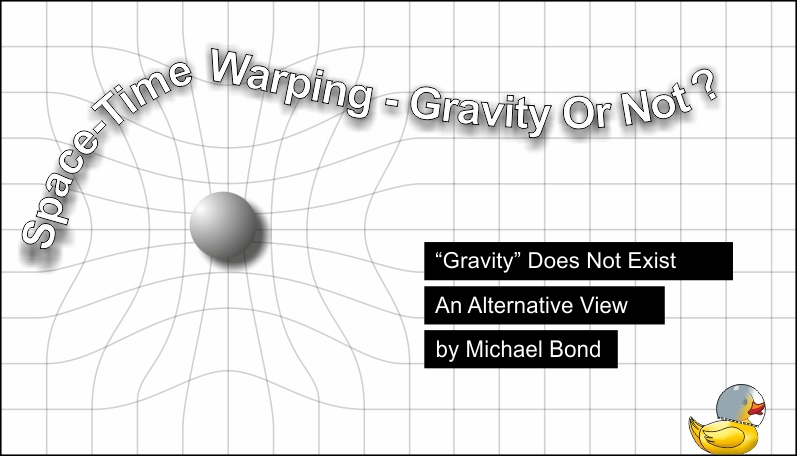 Gravity does not exist.  From my meagre readings of the nature of gravity and space I believe that our understanding of the cosmos* may need correction.  There is no such thing as gravity.

Space is a Big Sheet of Rubber

Whenever the public see gravity illustrated they are shown the image of a ball of matter (mass-energy) sitting in a two dimensional sheet, like rubber, indented with its mass. This is used to illustrate the nature of a body’s influence (the ball) over space-time (the sheet).  This very simple illustration to explain it is, I believe, more accurate than it may seem.

The Force of Gravity

Gravity is described as a force, a field of force that extends in an uniformly ever-decreasing zone radiating around a body that fades away with regular smooth progression to infinity as described in conventional Newtonian physics for centuries. However alternative theories** on the fringes of physics suggest that this gradual and smooth fading away tapers off after a certain distance to a flat level, a minimum strength the extends endlessly across the cosmos. This tapering off is not, then, a smooth fade out of gravity but a curved progression to a minimum strength, or something different.

There is another way to look at this if the idea of gravity is ignored completely and space-time is put in its place.

Like the rubber sheet any body influences space-time. From a small body like our happy little planet Earth, through the heavy mass of a sun all the way up to the heady and, currently, unfathomable heights/depths of a singularity and its black hole they bend space-time around themselves.

Space and time are bent, time slows down as you approach the edge of a black hole and this is described as the effects of “gravity”. It is better to say that “gravity” is a vague abstract label we’ve given to the interaction between bodies and space-time – the area on the rubber sheet that’s bent. I think we ought to be looking at this in a different way.

Space-Time as an Object

If space-time can be bent and twisted around by any presence of a body then we should be thinking and looking at space-time as similar to a physical object, like the rubber sheet, albeit in many dimensions more then two.

As an object space-time can be twisted, time can be slowed (it’s called time dilation, time slowing down as you race closer and closer to the speed of light), space can be bent (just imagine throwing a rock towards a planet and watching it curve down to bump into it, rather than racing past in a straight line – that’s bent space), and thus it has a form of physical property. I believe it may have other physical properties and these could explain other aspects and puzzles of the cosmos.

In the conventional understanding of gravity as a force there is a bit of a big problem in the cosmos. In the formation of galaxies there isn’t enough mass to explain the way galaxies hug together and stars from their speedy orbit. Stars spin around the galaxy so fast they ought to be flung out, but they aren’t – something mysterious is holding them together. To resolve this, physics has suggested a wonderful missing mass – dark matter, stuff we can’t see. There is supposed to be so much of this around to account for the extra gravity needed to hold galaxies together that it amounts to 90% of the cosmos, and it’s all invisible.

We seek it here, we seek it there and we can’t find it anywhere. That’s a puzzle unless you throw gravity away and start looking at space-time as a physical thing effected by and effecting masses like galaxies.

Alternative theory** is exploring the prospect that gravity does not fade out in a uniform line radiating away from an object, but fades out in a weakening curve until it flattens out suddenly in a transition to a minimum state to explain the behaviour of galaxies we’re seeing. This does away with the need for dark matter, no dark matter and thus no need to keep looking for a missing 90% of the cosmos.

So what is actually keeping objects like galaxies together if there is no extra mass like the invisible and mysterious dark matter?

Gravity does not exist yet the cosmos is bent around on itself. If you throw a rock, or rocket ship, far and fast enough in a straight line you will end up coming right around the cosmos back on yourself.

Gravity is explained as the reason for the bending of the cosmos. I believe there is another way to look at this – surface tension in the cosmic space-time.

If the effect of mass flattens out after a given distance then something must be acting on that effect, something else in the cosmos that neutralises the effect, or “gravity”, at a distance.

Treat the cosmos, space-time, as empty space and you have to look for exotic answers like dark matter; but treat space-time as a physical object with its own kind of mass and properties like bendability then it may have a property like surface tension on water. This surface tension flattens the effects of masses and yet curves the overall cosmos around on itself at the macrocosmic scale. It’s back to the big rubber sheet, bent around a very big ball with billions*** of tiny bumps and other flaws, features and fun stuff at a microscopic level.

Space bends around on itself as if it had gravity of its own, space-time has its own mass-energy, space-time is the missing 90% at the cosmic scale. At the local scale the effects of physical bodies are like a body in water, as the fringes of the body in contact with water cause water to reach up the sides of a body. This is surface tension in water and there may be something of its kind in space-time, a tension that flattens out the effects we call gravity around bodies and collections of bodies.

Like a body of water with its surface tension, it can form a raised droplet where more water gathers.

So instead of looking at holes bent down into space-time’s flat rubber sheet we can imagine billions of water droplets on the surface of a ball. The droplets are all the physical masses and the surface and shape of the ball make up the shape of our cosmic space.

What does it all mean?

Very little I suspect. My speculations are amateur at the best and not educated with the very latest theoretical mathematics.  My thoughts are intuitive rather then proven in any laboratory; but if anywhere near correct we ought to be looking at both how space-time works as a physical body and how we might take advantage of such a different view of the cosmos.  Space-time as a physical thing, a multidimensional surface, could be manipulated and rode like the surface of that fictional rubber sheet or water, might we be able to design a machine capable of bending the space-time and manipulating it just like a body does, or better?

An artificial form of manipulation could lead to the long-dreamt-of interplanetary and interstellar propulsion. That is something I am already working on through my Springship project.

Further thoughts on this subject and special responses to comments from some readers are now included in a second article exploring a possible means of measuring Cosmic Surface Tension in deep space.

After further consideration I believe the idea and concept of “Cosmic Surface Tension” needs to be renamed as “Cosmic Surface Pressure”. Considering that the effect of gravity does not taper off in a linear progression but flattens out beyond a distance from the edge of a galaxy there needs to be a pressure counteracting the effect of gravity from outside large stellar bodies. This is the pressure that is currently explained as “dark” matter.

Rather than think of a “tension” that pulls objects apart we must think of an outside pressure that is pushing back on mass-energy (stars, galaxies, your eyeballs). Thus we have a cosmic pressure pushing against and squeezing large bodies beyond the fringes of their own local gravity. This pressure then effects space-time where gravity is thought to be fading.

(*Cosmos.  For the sake of clarity I have been adopting the name cosmos, or cosmic space, to refer to what we used to call the universe.  In earlier ages the universe was everything “out there”, the visible, and less visible, collection of stars, galaxies and stuff we could see.  The universe was everything and universe means everything. However we are expanding our understanding of “everything” to include such concepts of many dimensions, many “universes”, cosmic foam of infinite bubbles and, potentially, an infinity of other ideas (you need branes for all this).  For clarity all of this should be defined as the global universe – the everything – and our little local pocket of space, time and whatnot ought to be renamed for clarity, hence the adoption of “cosmic space” and “cosmos” for this, and any other suchlike space, bubble, whatever.)

(**Alternative theory – MOND – Modified Newtonian Dynamics suggested by Mordehai Milgrom has proposed this decline and flattening of the force of gravity. I have taken this as the starting point in my own wild speculation.)

(***Billions.  For further clarity I often use the British definition – millions of millions.  Recent reports from astronomy suggest the cosmos, formerly with a hundred thousand million galaxies, is now populated with twenty times that figure – two million million or two billion galaxies. That’s more of the bending mass to deal with.)