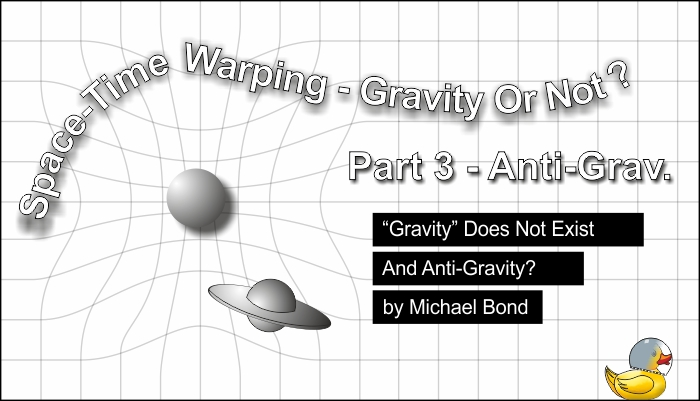 Gravity does not exist.  From my meagre readings of the nature of gravity and space I believe that our understanding of the cosmos* may need correction. There is no such thing as gravity. Part 3.

In my previous articles on the theme that “gravity” does not exist I’ve stretched the big rubber sheet of imagination to help understand how it doesn’t exist and how we might explore the boundaries of it around our solar system.

Now I want briefly to explore the next option – how to understand and perhaps one day master so-called “anti-gravity”.

If gravity is just the word we use to explain and study the bending, stretching and squeezing of space-time by mass-energy, then the attraction of one mass (an apple) to another (a planet) is just the falling of the lesser through the bent space-time until it’s stopped by the greater.

In other words a small object falling to the planet is not being pulled down, but is just falling down through the bent structure of space-time like a small rubber duck down a children’s playground slide.  It is not being attracted and there is no formal force interacting between the two, larger and smaller objects – they are just falling together until they bump. (Note if a large enough apple bumps a planet the dinosaurs vanish, be careful of those big apples).

So if space-time is being bent by mass-energy could it be bent back, and could such counter-bending act in the manner of “anti-gravity” for spaceflight?

An anti-gravity propulsion system for a spacecraft might use a suitable variant of mass-energy to counter the localised bending of space-time around the craft.  This would allow it to leave the local space-time dimple in the gravity well of a planet or sun. Such a counter-field does not necessarily have to have magical properties or even special materials, e.g.., all the missing dark matter or dark energy, just a suitable use of locally-available mass-energy or comparable manifestation.

Forget a big rocket, forget any simple kind of Newtonian counter-force (for every action there is an equal and opposite reaction).  This kind of spacecraft (let’s imagine a Springship with a suitable modified outer shell – Springship version 6) does not thrust or push or in any way try to move its mass away. The force aims to act on local space-time to unbend it and twist it around a little bit, creating a suitable envelope of unbent space-time to move away from the local dimple around Planet X – an anti-dimple.

This may appear a monumental exercise, but I am not discussing major long term bending. A small craft needs a relatively small force to counter the bending of space-time if it is applied appropriately at a very local point in space for a very brief time, relatively speaking.

The technology is not yet ready for unbending space-time, although there are clues as to how it might be done. It will take a lot of time and effort but should not be insurmountable. After all a planet does a lot of bending all the time.

At the other extreme of such a counter-field, once mastered, comes the possibility of squeezing space-time down to the event horizon – a hyper-field. This is what I’ve long called the “Wormwell Drive” for my science fiction stories.

A Wormwell Drive (wormholes down the gravity well) takes the space-time counter-field, reverses it and squeezes it down to the event horizon, bending space-time around a vessel to the point where it can cross over into another locality, whether by wrapping a craft in a warped bubble or punching momentarily through the space-time barrier to another location (jump drive).

We will not know which aspect of the Wormwell drive is practical, bubbles or holes, until we master the local counter-bending, but I believe the latter may eventually become a norm for long range space travel on Springships and other craft.

I’ll be looking into this in due course as we develop the right technology.

(*Cosmos. For the sake of clarity I have been adopting the name cosmos, or cosmic space, to refer to what we used to call the universe. In earlier ages the universe was everything “out there”, the visible, and less visible, collection of stars, galaxies and stuff we could see. The universe was everything and universe means everything.  However we are expanding our understanding of “everything” to include such concepts of many dimensions, many “universes”, cosmic foam of infinite bubbles and, potentially, an infinity of other ideas (you need branes for all this). For clarity all of this should be defined as the global universe – the everything – and our little local pocket of space, time and whatnot ought to be renamed for clarity, hence the adoption of “cosmic space” and “cosmos” for this, and any other suchlike space, bubble, whatever.)