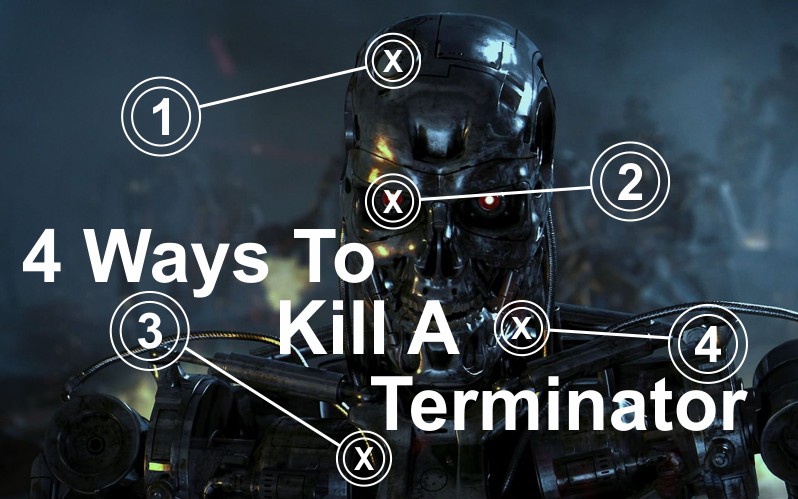 4 Ways To Kill A Terminator

“Read this if you want to live!”

I’ve just finished a marathon viewing of the “Sarah Connor Chronicles” so my mind is all abuzz with Terminators. Add in the endless stream of details for the forthcoming and potentially very controversial Terminator reboot trilogy and you have to start thinking about what’s coming and what would you do if you were confronted by a Terminator.

How would and how could you kill one of these metal beasties? By now Sarah and John Connor ought to have learnt the lesson that 9mm bullets don’t work and hauling a 40mm grenade launcher around when you go shopping isn’t going to endear you to the local police. This set me thinking about the kind of weapons you could use with a few simple modifications.

Here are my four key alternative solutions for any future Terminator confrontation, there are a few more options at the bottom.

Unfortunately I don’t know where you can buy a phase-plasma rifle in the 40 watt range.

Famed for being a bloody big gun for those who like the flash their metal, the Desert Eagle is outstanding for the fact of being a large calibre automatic pistol. Forget your puny little 9mm the Desert Eagle give you a full-on half inch of heavy metal punch.

On its own that not a bad thing to have around if you want to knock a Terminator back off its feet while you scramble out the back door, but not really a Terminator stopper. What if you could modify it and give it a bigger punch?

If you can miniaturise computers today can you reduce the size of an armour piercing high explosive round and create a special one for the Desert Eagle? A half inch explosive round might just be enough to knock a Terminator over or even punch through its armour and take out something vulnerable. If nothing else it could do some serious damage, enough for you to escape.

The round would have to have a smaller weaker firing charge to make room for the bang at the other end, but this is intended to be a short-range self-defence weapon when things get close up and very personal.

For that reason a Desert Eagle with a mix of ammunition, armour piercing and explosive makes a good personal backup weapon. But maybe we need more punch.

Anyone who’s a fan of Stargate SG1 knows the P90, favourite of SG1 on their many missions.  It is a compact lightweight sub-machine gun with a 50 round box magazine on top. Perfect for delivering a rapid rate of fire out to a couple of hundred yards.

Unfortunately the standard P90 has a smaller calibre that’s more likely to bounce off most Terminators than do any serious damage. But what if we could rebuild it, adapting it for Sarah’s Boom-Boom half inch rounds from the Desert Eagle?

With a longer barrel you have longer range so this makes a good intermediate range compact weapon Sarah can keep in her knapsack or under the car seat. With a half inch calibre and large magazine, maybe upto 40 larger rounds, you may have enough explosive and armour piercing punch to trash a Terminator and still have rounds to spare.

The P90 then is a potentially good solution to dealing with many of the earlier generation Terminators and makes a compact weapon easily stored to-hand for any sudden attack.

Unfortunately upgrading the P90 and supplying the bulk ammunition might be a challenge to Sarah and John who seem to be in a perpetual state of running from their own shadows and never gathering an army around themselves. They would have to create their own large workshop and guarantee a supply of parts wherever they go in the world.

As a backup weapon perhaps there’s a much simpler solution.

We’ve already seen how Sarah and John can acquit themselves with pump action and automatic shotguns, but those guns lack the real killing punch of something more powerful.

Shotguns have a larger calibre than pistols and a smooth bore to take any kind of ammunition, so why restrict yourself to shot?

As with the Desert Eagle and P90 it ought to be possible to create a longer, larger more powerful explosive round, enough to blow the head off any Terminator with a single shot, and you have one shot to spare.

The advantage of this over a pump-action gun is the ability to take larger rounds and the simplicity of the weapon, with very little to go wrong, jam or fail you in an intense struggle for your life.

Reloading should be quite easy and swift for those as practised as Sarah and John and they could easily carry a spare under the other arm. With Sarah and John together, alternating their shots, they could keep up a furious rate of fire to devastate numerous Terminators.

Shorten the barrel enough to carry in a car without being an illegal sawn-off gun and you have a good compromise for an effective range, compactness and delivery of a powerful round.

If you want to modify it further then add muzzle brakes for stability and to reduce the kick when you’re in a hurry to blast a ‘bot, attach lights to illuminate the scene or probe the darkness like all good Hollywood films (because you can’t find the light switch on the wall) and fold the stock for convenience in the boot/trunk of your car/pickup.

So far guns here are useful adaptations of existing kit but restricted in range. If you want a longer punch and guaranteed one-hit success you need the ever-popular and glamorous half inch sniper rifle. But they pose a problem for frequent close combat – they’re too big!

Most combat with Terminators take place at short range or in closed/built-up locations, house-to-house, sewers (post-Judgement Day), etc. The problem with most sniper rifles is their bulky, ungainly size – they’re too long to swing around and shoot quickly in a room or dark passageway (still can’t find those pesky light switches).

What you need is the killing punch of a single high velocity metal or explosive half inch round combined with the compactness of a smaller weapon.

So make it smaller.

Shorten the barrel, improve the muzzle brake for stability and knock off a foot or more from the length. You still have a weapon that will trash a Terminator at a good range. You might loose several hundred feet in range but still outreach most problems when you’re chasing and being chased by the metal monsters.

The advantage of this is that you only need to cut the barrel down off an existing weapon, no special rounds or mechanisms. This would make the best quick answer to the problems of terminating Terminators while you, or Sarah and John, work on the other solutions.

Ah, I heard you think, but what about T-1000 or a spunky little TX, surely they’d be better at surviving these few rudimentary suggestions?

Correct, but there are numerous other ways to terminate a Terminator. Here are a few extras for fun:-

A super corrosive would be one alternative way destroy/disrupt polymetal. No matter how futuristic and wonderful that metal is it must still use microscopic or other bindings between each cellular component. At these small scales a sudden flush of acid could easily wash those connections away.

Weapon: Use a superduper water cannon. The kind loved by children with overindulgent parents and great for fighting wars in the back garden. A superduper glass/ceramic water pistol would hold and eject a jet or spray of acid right into the face of any polymetal Terminator.

Weapon: Adapt the shotgun rounds to contain a vial of acid in the nose that shatters and sprays on contact. Or use your pump action/automatic shotguns for smaller pellets of acid to spread your attack across the Terminator’s body.

Weapon: Glass bulbs/bottles.  Good for throwing and shattering on and around any pesky Terminator.

Weapon: Paintball guns fire small pellets of dye, can they be adapted to fire small glass vials of acid?

Electromagnetic Pulse (EMP)/electro-shock weapons of various kinds can disrupt the internal circuitry of any machine, so zap them with a local EMP jolt them with electricity and zap them with concentrated focussed radiation, or just a big taser.

Weapon: Try something like a large taser, if necessarily with a backpack sized power storage. Who you gonna call? Terminator-Busters!

Metal melts, but generating thousands of degrees of C and directing it long enough may not be possible in most conditions, but capturing one with a magnetic grapple and dropping it into or holding it over a source of heat could do it some serious damage.

Alternative what about concealed thermal torches/lances, like a welder’s torch. Trap a terminator in a corner and fire it with one or several hot torches could do a lot of damage, but not the ideal situation. Consider this a backup safety guard for your Terminator-proof fortress.

We all know that a good slab of that ever-favourite “C4” or “plastique” should be enough to blow a Terminator to smithereens, just thought I’d mention it before anyone complains I’ve missed it out. Of course you have to get it close enough to do that damage, unless you wire a wall to fall on the robot. (Walls are known to be good at slowing but not stopping them.)

Weapon: Archery has become popular nowadays with Katniss and Hawkeye shooting all over our screens so how about strapping a little block of explosive to the tip of an arrow, especially in a shaped armour-piercing charge?

Weapon:  A good throwing arm for a grenade or small block of explosive.

Sarah is supposed to have learnt all her skills from “special forces” and mercenary “experts” while raising and teaching John but these experts haven’t been told or believed what Sarah has been preaching for years.

Perhaps she should have been speaking to weapons innovators and designers as well?

Of course it’s all fiction. A total, Hollywood trash, fantasy. But there is a bigger issue here.

Science Fiction is a great way to explore ideas and opportunities and one day something like the Terminator may stride the world. Already we see drones flying around the world assassinating “terrorists” (those who didn’t vote for the global world order, of America), we see the development of robotic aids in the battlefield, automules, and other devices. We see the experiments with augmented battle suits for American soldiers, those few future starship troopers who will be left standing against the forces of the “terrorists”.

It is only a small step from this to fully-automated/remote-controlled battlefields where fast-response automated technology increasingly replaces humanity.

We may not see an end of the world the way it occurs in Terminator, but it’s possible, in the right circumstances, after one technology has been piled on top of another for something to trip the wrong circuit and send the whole mess into a cascade of chaotic reactions resulting in something very similar to, or very much worse than Judgement Day.

“Be Prepared” is the Scout motto, prepared for the worse, whatever comes. Prepared for trouble but prepared with the mindedness that focuses on the essentials. A few simple adaptations of existing weapons could make all the difference and as “the metal” machines rise around the world so the human flesh will adapt and evolve to defeat its threat to our survival.

Not every problem in the world can or should be solved with the most sophisticated and elaborate technology. America didn’t win Vietnam with it, and the Taliban in the middle east have proven to be remarkably resilient to high tech superpower.

Where will you stand and how well armed on the day of the machines?