Stopping Apple.inc processes on your Windows 7 PC if you find internet connections
stalling or applications slow to launch from taskbar.

Yesterday I experienced an unusual problem with my Windows & PC.  Over a couple of days the processes began to stall, applications either wouldn’t launch off the taskbar or were slow to launch, these applications had been behaving perfectly only a few days earlier.

Something had gone wrong.

I have no idea what happened, but suspected a conflict with new service packs, a new application I’d just installed (and removed) or an installed programme had up-dated itself in the background and caused an issue.

After a little research on the internet (from the backup PC) I did find one effective solution – that by switching off non-critical applications and processes from the Startup list, especially those registered from Apple.inc, this issue could be solved (are Apple and Microsoft still at war, and are we the victims?).

How To Squash Apple On Your PC 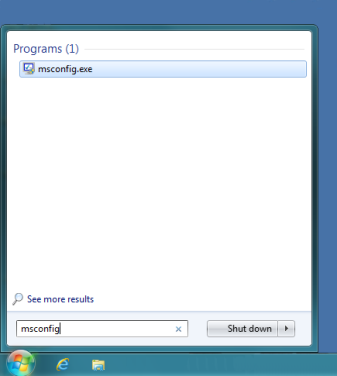 This is simple a matter of stopping the applications from launch and running in the background every time you launch your PC.

First you need to launch the “msconfig.exe” application.

Open your Start menu (bottom left button?) and enter “msconfig” on the search box (see illustration on the right).

This will open up the msconfig “System Configuration” application on your screen and give you access to all the processes and applications that are running and launch at start-up on your Windows PC.

On this you will see the “Start-Up” tab (illustration below). This is where you can see and control the applications that launch at start-up on your PC. (This also dictates how quickly or slowly your PC will start up – every extra application on this list will slow your start-up time.)

Find the ones marked Apple.inc. Kill the Apple.inc applications by ticking them off and selecting the “Apply” button. You will have to restart the machine for this to take effect but you ought to see an improvement in the performance or restoration to its previous condition

You can also take this opportunity to read through other applications, are they really necessary on start-up, or can you live without them running in the background (I noticed a whole raft of applications running that I had never used on this PC, so stopped them all from launching)? 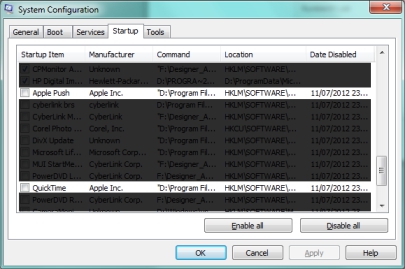 If this solves your problems and all your applications launch safely, your internet connection is restored/improved then here are a couple of additional options to keep it safe in the future:-

(a)  Make a full image back up of your PC, this will copy the entire system disc to a backup drive or another PC store.  If you have any major problems in the future you can restore that backup.

(b)  Use the System Restore feature of Windows 7 to create a restore point.  This saves the configuration of your PC at this new state and you can return to that point, at least until that restore point is overridden (they don’t last forever).